Paul Budde, the Australian telecoms analyst and FTTH enthusiast, has a feisty blog post up. In it he draws parallels between fibre-sceptics and climate change deniers, saying they're both mud-slingers who get far more attention than they deserve.

Paul complains: "So far we have not come across any NBN sceptics who have dared to move into the area of what the extent of the NBN’s potential – the digital economy, intelligent infrastructure, big data, clouds computing, e-health, e-government, smart grids and so on".

This is a surprising allegation, since there are plenty of people out there expressing doubts about these beneficial externalities, and I know Paul has read at least one such paper - the one I wrote (together with my brother). This addressed exactly the issue of superfast's potential, and spent some pages on why its contribution to e-health and smart grids has been much overstated. I certainly don't expect everyone to have read this paper, but I happen to know Paul did read it - he wrote quite a long response to it. Still, perhaps it wasn't interesting enough to stay in his memory.

Never mind, let's move on to some of Paul's other points. I'll set aside his unsupported assertion that less than 5% of commentators feel the NBN is a waste of money. His key points (paraphrased) seem to be:


The Digital Economy
Certainly we need to embrace the digital economy - it's a bit of a motherhood statement. The critical question is whether we need superfast broadband to do so. The US, the economic heart of the internet and home of most of the major internet application companies, doesn't actually have particularly good broadband infrastructure. Akamai ranks it 9th worldwide for average connection speed. The UK has the largest internet contribution to GDP of any G-20 country, but is only just above the middle of the G20 pack in terms of average connection speed (among the countries tracked by Akamai). Thus there seems to be very little connection between broadband speed and strength of the digital economy. Rolling out fibre is simply not a magic economic wand.

New jobs
Paul's suggestion that the NBN could create "millions of new jobs" is certainly a bold claim to make without supporting evidence - total employment in Australia is a little over 11 million, so to add 'millions' by improving broadband speeds would be quite something. Paul's claim is all the bolder when you realise that of the 11 million, 3 million work in sectors such as agriculture, mining, public admin & safety, and health care & social assistance, all areas where the NBN is unlikely to create many new jobs.

Cost savings - healthcare
Indeed, if Paul is to be believed, there may in fact be job losses, since he tells us there will be huge cost savings in healthcare and electricity. Paul hasn't provided us with sources, so we'll need to do some guesswork in looking at these. He's been using the $30bn healthcare saving number since at least 2009, and I suspect it's from a 2007 KPMG report on the cost-benefit of electronic health records. This is not itself available online, but it underpins a key November 2008 Booz report on the potential of eHealth (see p35), for National Health & Hospitals Reform Commission.

The vital point here is that the number is not the benefit of NBN, but rather the benefit of eHealth. The vast majority of the benefits of eHealth do not depend on superfast to the home. They can be achieved via good broadband to medical premises (which generally already have it), and basic broadband to homes. Indeed, while the Booz report highlights the importance broadband, it absolutely does not highlight fast universal broadband as a requirement for the eHealth benefits. Indeed, it discusses Germany's substantial eHealth plan based on DSL. To say the $30bn eHealth benefit depends on NBN is simply wrong.

Cost savings - energy
Let's have a look at the $2bn energy cost saving. Again, Paul hasn't provided a source for it, but it is a number he's been using since 2010, when he said it stemmed from "savings from a duplicated comms network and double installation". Even then he didn't provide a source, so we can't directly review its basis.

However, there are plenty of figures out there for the cost of installing smart grids. Enel, the Italian electricity company, has installed 33m smart meters, at a unit install cost of €13 (derived from this). Scaling this to Australia's 8.7m households, we get a total cost of A$136m. While it's plausible that some joint roll-out of the NBN and smart meters might save some of this, clearly a percentage of $136m is not going to make much of a dent in the purported $2bn saving.

So perhaps most of it comes from avoiding a 'duplicated comms network'? The trouble is that smart grids absolutely do not require the bandwidth of NBN. They can work perfectly well on existing telecoms networks, and indeed the successful Enel network (completed in 2006, long before superfast broadband) does exactly that.

International bipartisan support
This leaves Paul's comment that there are "119 countries around the world [that] have national broadband plans, and everywhere but in Australia there is bipartisan support". Deliberately or otherwise, this statement gives the impression that Australia is in good company with its broadband plan - nothing could be further from the truth.

Firstly, in renationalising a substantial part of the telecoms indusrty, Australia has taken a highly unusual step. The great majority of countries (including all other OECD countries) that have chosen to support superfast have done so via commercial players. Even those that have taken parts of the network into government hands have done so on a far more limited scale.

Secondly the NBN is an extreme outlier in terms of the level of government investment: 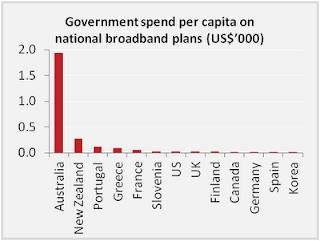 Given that the Australian government is spending so much more than other governments, surely it's not unreasonable to focus on costs, and to ask if the benefits will really outweigh them?

Oh, and for the record, I am a believer in climate change!